Record of prayers, circumcisions, marriages and deaths, kept by Reverend Jacob Raphael Cohen and continued by others after his death, 1776-1843

Record of prayers, circumcisions, marriages and deaths, kept by Reverend Jacob Raphael Cohen and continued by others after his death, 1776-1843

Cohen began this record book in 1776, writing from the front as well as from the back, and his entries record events in Montreal and New York, as well as a few other locations, in addition to Philadelphia. He wrote in English and Hebrew. After Cohen's death, the record book was continued by several others, including Benjamin Nones, Dr. Alexander Wertheim, Lewis Allen, Zalegman Phillips, and Abraham Hart.

Alan Corre, who served as rabbi for Congregation Mikveh Israel from 1955 to 1963 and who was an esteemed scholar of Hebrew Studies, and Malcom Stern, a rabbi and historian who has been described as the dean of American Jewish genealogy, published an article about this record book in The American Jewish Quarterly in 1969 (https://www.jstor.org/stable/23878015). In this article, Corre and Stern provided Hebrew translations for the prayers recorded by Cohen, and with the generous permission of the American Jewish Historical Society, those translations are now included in the transcription for this record. Corre and Stern also organized the data on circumcisions, marriages and deaths into tables, and provided detailed historical context for the records.

A prayer for the Eve of Kippur from Cohen's time in Montreal is found on page 1, and repeated with additions on page 93. The misheberach (public blessing) prayer is found on page 4, and escabot/hascabot (memorial) prayers are found on pages 6 to 8, 10, 19a and 19b of the manuscript. A copy of the Order of Service for the Day of Dedication (for Mikveh Israel's new synagogue) is found on pages 20 to 22.

Circumcision records are found on pages 14 to 17 and 23 to 25, and include date of birth, name of father, son's name, and date circumcised.

Marriage records, called ketubot or ketubah, start on page 92 and run backwards to page 44. The ketubot are written almost entirely in an Aramaic-Hebrew idiom; however they are fairly standardized, and Cohen provides English translations of two Canadian marriage contracts on pages 88 and 92. Please see also https://www.sefaria.org/Ketubah_Text.4 for the traditional ketubah text, which may have been altered slightly in practice.

A haliza document, releasing a widow from marriage to her husband's brother, is found on page 72. 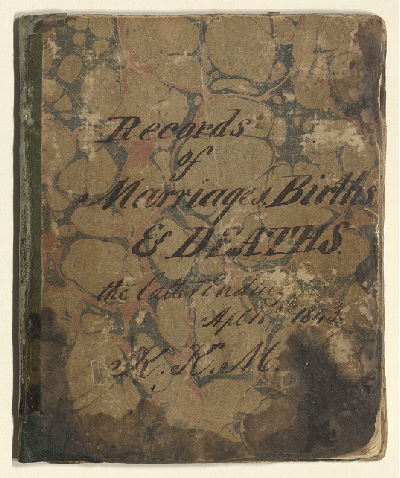